Memorial Day Tribute to Veterans Past and Present 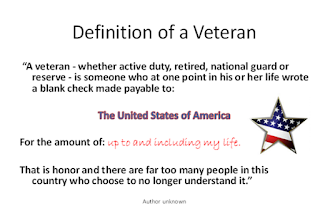 Author unknown. The following poem does not give the author’s name. It saddens me when someone has been gifted to write such a beautiful memorial and they did not receive credit for it. Maybe it is an indication of how we truly are a part of each other. As you read the poem and your heart stirs, or a lump is caught in your throat or tears form in your eyes, know those are noble emotions. Feel it, embrace it. And be thankful.

He was getting old and paunchy, and his hair was falling fast,
And he sat around the Legion telling stories of his past.
Of a war that he had fought in and the deeds that he had done,
In his exploits with his buddies – they were heroes, every one.
And though sometimes to his neighbors, his tales became a joke,
All his Legion buddies listened, for they knew whereof he spoke.

But we’ll hear his tales no longer, for old Bill has passed away,
And the world’s a little poorer, for a soldier died today.

He was just a common soldier, and his ranks are growing thin.
But his presence should remind us we may need his like again.
For when countries are in conflict, then we find the soldier’s part
Is to clean up all the troubles that others often start.
If we cannot give him honor, while he’s around to hear our praise,
Then at least let’s give him homage, at the ending of his days.

Perhaps a simple notice in a paper that would say,
“Our Country is in mourning, cause a Soldier passed away”.
Author Unknown

Posted by Mona's Motivational Messages at 11:03 AM No comments: